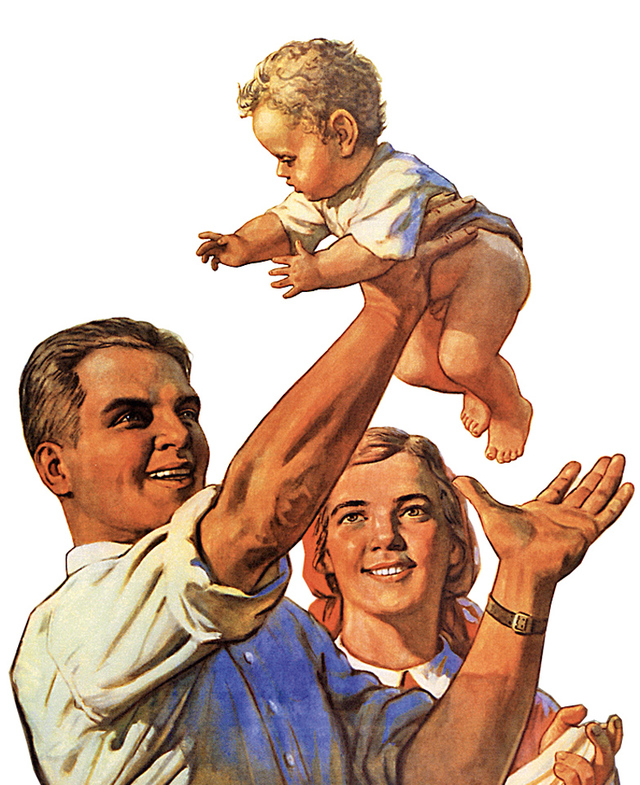 Europe’s population crisis stems from the simple fact that the number of children born across the Continent is not high enough to replace one generation with the next. In countries like Germany, Italy and Spain, the population is declining between generations by as much as 30% to 40%.

With a rate of around 1.36 children per woman, Germany currently has one of the lowest fertility rates in Europe (Slovakia is lowest, at 1.31). And yet, compared with other countries, the subject receives almost no discussion there. Given the horrible excesses when fertility was a core preoccupation of the National Socialist ideology, it is understandable that Germans today are hesitant to broach the subject. Yet, the topic cannot be avoided forever. The drastic fertility decline since the early is the core factor of the country’s population aging today – the increase of life expectancy is only a contributing element.

More importantly, sub-replacement fertility at such low levels will lead to substantial population decline, which cannot be compensated by immigration. Of course, people have a right to as many – or as few – children as they want. This individual choice, a basic human right, is completely undisputed. However, there is also a fundamental dynamic of fertility that relates to the longterm viability of a society, an economy and a culture. Plainly speaking: Europe’s – particularly Germany’s – fertility levels are not sustainable. It’s time to face this fundamental problem and seriously explore possibilities for encouraging people to have children.

Before retiring in January, Gerhard K. Heilig was chief of the Population Estimates and Projections Section at the United Nations Population Division

According to accepted wisdom amongst many German leaders, immigration is the remedy to the rapidly aging and declining population. However, with fertility rates so low, the unpalatable truth is that it is a mathematical impossibility for immigration rates to make up the difference.

If you crunch the numbers, you realize it would require a continuous massive stream of people entering the continent annually – and not just tens of thousands. For instance, in Germany, some 261 million net immigrants would be necessary over the next 90 years to stabilize the current old-age dependency ratio – an important indicator of population aging. At current levels of fertility, Germany’s population would have to increase to roughly 490 million people through immigration to prevent further population aging! That’s a mind-boggling number and illustrates the absurdity of considering immigration a solution to the country’s demographic problems (see graph).

Even if everyone in Germany were committed to such massive immigration – here comes another unpalatable truth – the nation has to realize it is just not particularly attractive as an immigration destination. 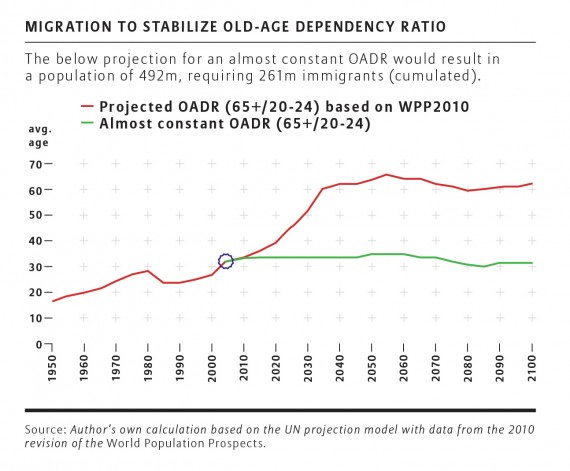 In recent decades, Germany’s declining demographic fortunes were masked by two events: the fall of the Iron Curtain and the current economic turmoil in southern Europe. Germany has benefited from an influx of young immigrants from eastern and southern Europe fleeing economic malaise.

But these are isolated historical events. Germany cannot expect to see a substantial, continual inflow of young, well-educated people from economically lagging European countries throughout the rest of the century.

So where could new immigrants come from? Many parts of Africa and Asia have overpopulation, but hundreds of millions of immigrants from Nigeria, Kenya, northern Africa, Bangladesh, India or Pakistan are probably not what proponents of open migration policy have in mind.

They tend to assume immigrating populations would be highly skilled, motivated young people. But even if a source of skilled immigrants were found, would Germany be the destination of choice?

If I were a young well-educated person from India, I’m not sure Germany would be the place for me. I might decide for Silicon Valley in the United States or move to Dubai to take advantage of its dynamic economy. So the idea that Germany will always be a people magnet and that all the government has to do is initiate an open-door policy is flawed.

This was seen when Chancellor Gerhard Schröder announced a ‘green card’ program to attract skilled IT workers. The program met with initial international indifference. Ultimately, some 14,876 work permits were issued up until, but this still fell well short of the initial desired quota of 20,000 experts.

As a demographer, I find the immigration debate riddled by some of the most misleading myths I have ever encountered. Of course, a country benefits from immigration, and intellectual and cultural diversity is a great benefit. But immigration is not the solution to the low fertility and population aging dilemmas. If a population for generations does not replace itself through children by a large margin, something is fundamentally wrong with its social, cultural and perhaps economic system. Extremely low fertility is at the heart of many of Europe’s economic and social problems, and it is high time that we confront the issue instead of diverting attentions to side issues such as immigration policies.

Neil T 02/09 at 07:40AM
We only say that Diversity is a good thing due to "White guilt". It's not only not good, it's really weird. 93% of the world all REJECT Multiculturalism/Diversity because a country is a home to a unique people and unique way of life in a diverse world. Diversity means that there's no more China, no more Israel, no more Germany, just a world of "clones". That is scary.
Yosser Hughes 12/12 at 08:43AM
Anybody with a passing interest in population would have noticed its increase is related almost directly with 'energy use'. As coal use went up massively in the last few centuries population followed. Hydrocarbons have nothing to replace them and resources are depleting with more people using them.......the choice is to enjoy massive famines and warsonward to get a global population balance, or to gently reduce numbers. The planet might be able to handle .5 billion without fossil fuels.
Michael Dawson 12/07 at 08:49AM
Worrying that an expert in this challenging field is so pessimistic and unable to even outline a positive way forward. The whole world will come to accept that the world's population must stabilise, and that it is possible for this to happen in a sustainable and harmonious way, including the rise of cooperative supra-nationalism instead of competitive statism.
Beno 11/11 at 07:47AM
It is not clear whether the stats include the "non Europeans" immigrants. Also I believe that a natural decline in birth rates would not have been a problem without the robust birth rates of the immigrants.
Related articles
Related articles

Despite the financial crisis, labor mobility in the European Monetary Union remains negligible. This is hampering a quicker recovery from the crisis

As societies age, rich nations will have to take in more and more immigrants from developing countries - a win-win for both migrants and their host countries