World Heritage sites in peril of being overloved?

World Heritage listing is increasingly seen as a brand by travelers, a stamp of quality that the site offers an experience that is unique or truly spectacular. But is the influx of tourists caused by listing causing more harm than good? 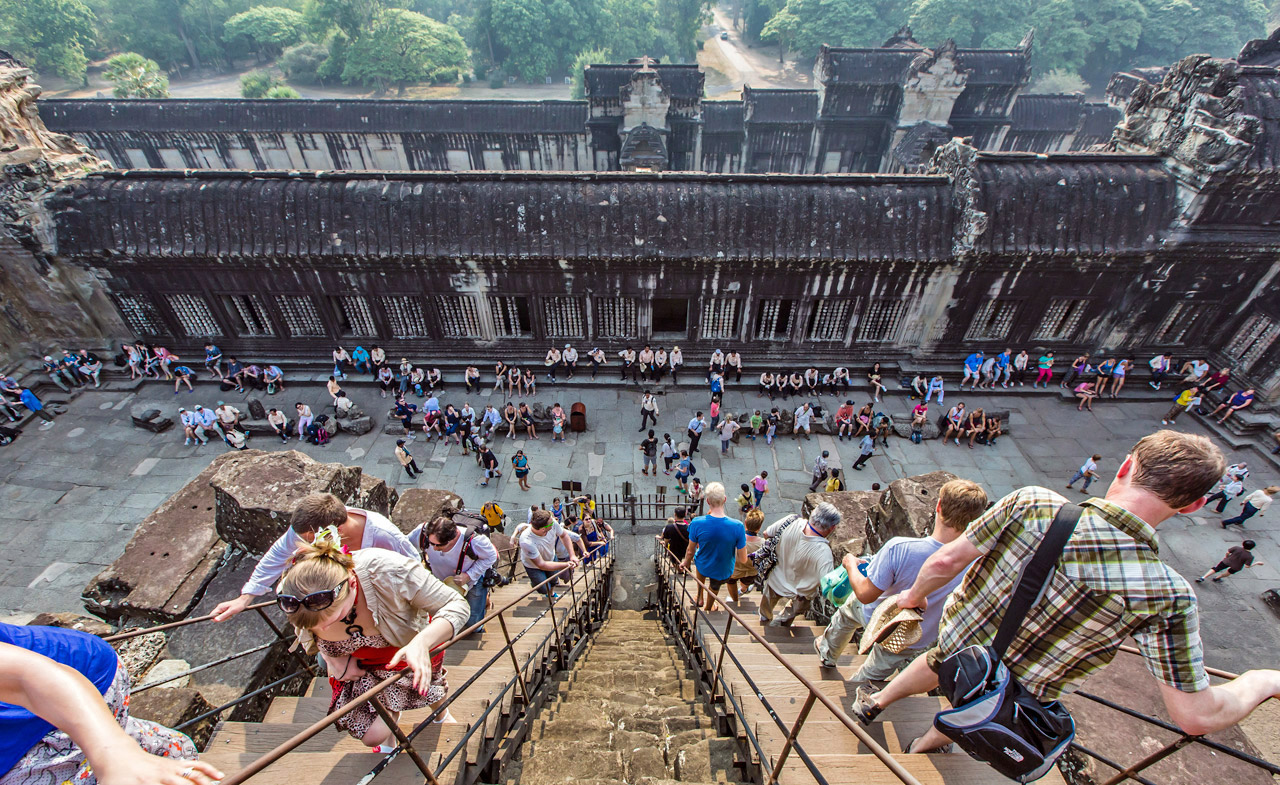 World Heritage sites in peril of being overloved?

World Heritage listing is increasingly seen as a brand by travelers, a stamp of quality that the site offers an experience that is unique or truly spectacular. But is the influx of tourists caused by listing causing more harm than good?

Although she earns a good wage, Els Slots prefers to live in a small, cheap apartment in the Dutch cheese town of Gouda. She has no pets, plants or other commitments because, when she walks out for her great passion, she wants to close the door and be gone.

Slots, 46, an executive with an IT company, has arranged her whole life around travel. She usually takes an extra 15-25 days of unpaid leave on top of her 25 annual holidays. “I was in a boat in the heart of the jungle for six days on a tour,” she recalls of one trip to the Manu National Park in the center of the Amazon in Peru. “It is an incredibly pristine world.”

It was also, in a lifetime of wandering the globe, the most beautiful experience she has had, but she was also deeply affected by the mystic ruins of Takht-e-Soleyman in Iran. The center of Zoroastrianism, it was built in the volcanic mountain region in the sixth century. “It is a very remote, spiritual place,” she says.

Slots, who studied history at university, sees herself as a global traveler irredeemably curious about foreign lands and cultures, as well as the world we live in, a place that should be admired and enjoyed. Others, less kind, may describe her as a meticulous list ticker-offer, the monument equivalent of a trainspotter.

The list Slots works from is the UNESCO World Heritage, a register of some of the most geographically stunning or historically irreplaceable places on the planet. Established in in a cross-border spirit of co-operation to recognize and conserve places of global importance, the World Heritage list has, according to critics, come to represent a “grandiose marketing tool – fodder for ‘things to see before your die’ coffee-table books.”

Some sites, such as the Pyramids, Taj Mahal and Stonehenge, are so famous that they would draw crowds even if not listed. For others, especially in developing countries, the inclusion of the UNESCO logo on the site can ensure it becomes a major visitor drawcard – and bring a flow of tourism dollars into the local economy.

But the resulting hordes can also threaten the sites UNESCO is trying to protect. When Cambodia emerged from two decades of civil war, genocide and occupation in the late, the concern about the former capital of Angkor, one of the most spectacular sites in Southeast Asia, was about salvaging it from decay and destruction.

UNESCO listed Angkor in and the site now attracts more than two million visitors a year, which is becoming a conservation nightmare. The steady tread of the tourists is wearing away the brittle sandstone of Angkor Wat, the temple complex with the soaring spires at the heart of the site. An urban explosion in nearby Siem Reap is straining infrastructure to its limits.

Italian development writer Marco d’Eramo has said a serial killer of cities is wandering the planet and coined a term for this: UNESCOcide. Although done with the loftiest intentions, “Wherever the UNESCO hallmark is applied to a city, the city dies out, becoming the stuff of taxidermy,” he wrote.

Among his examples is Luang Prabang in Laos. The charming capital of a 1,000-year-old mountain kingdom, Luang Prabang was thrust into the limelight when listed in. In two decades it has gone from obscure impoverishment to become a favorite destination in Asia, attracting more than 445,000 international visitors alone – with all projections showing further steep increases.

Locals are happy about the influx of cash, but many are moving out as homes are sold or rented. The historic town is now a tourist trap of houses converted to accommodation and generic trinket shops. This kills local life and helps destroy the charm that made Luang Prabang an attraction in the first place.

“It is heartrending to watch the death throes of so many cities,” wrote d’Eramo. “Glorious, opulent and hectic for centuries and in some cases millennia, they survived the vicissitudes of history, wars, pestilence and earthquakes. But now, one after the other, they are withering and becoming steadily less populated, reduced to theatrical backdrops against which a bloodless pantomime is performed.”

To date, Slots has visited 610 of the 1,052 World Heritage sites. She doubts she will see them all, as UNESCO adds more each year to create a moving target. However, with the most accessible sites already crossed off, she aims to spend the next years visiting as many of the obscure ones as she can.

Slots shrugs off criticism that “baggers,” as World Heritage site collectors are called, increase traffic and, therefore, damage to World Heritage sites. She believes that baggers are motivated by a love of history and of architecture so have an innate respect for the irreplaceable value that the UNESCO sites represent.

“Anyone should be allowed to see the sites,” she says. “They are a legacy of humanity and our planet. What is needed, however, is better management at a local level.”

Atila Ege agrees. He heads the leaderboard on the bagger website that Slots set up in. In August and September, he and his wife, Nihal, headed east to South Korea, Japan, China and Mongolia. The 21 sites he visited took his tally to 817, while Nihal is the current female record-holder with 788.

So is the point to tick off destinations? No, explains Ege. He and his wife have been avid travelers for 50 years. During a visit to Chile in, a couple advised them to visit World Heritage sites. “We tried it and loved it,” he says. “We learned that there is a group of people who do this because UNESCO chooses the best sites.”

Indeed, for many baggers, World Heritage listing is a stamp of quality. Many destinations boast they are the biggest, the best or the oldest, but tourists become skeptical of the advertising hype. When UNESCO lists a site, even if it’s a hole in the ground such as the Messel Fossil Pit, then visitors are assured that something special, if not absolutely unique, is on offer.

Ege’s experience in Chile led him to visit the nine UNESCO sites back home in Turkey. “At the time, there was little awareness of the importance of these treasures in Turkey,” he explains. “So my wife and I decided to visit as many international sites as possible, meet with those managing them, and bring best practice back home.”

Ege is well connected in Izmir. He belongs to the Rotary Club, Lions and Free Masons, and also runs a computer and language school with 300 students. “From on, I concentrated on giving talks about UNESCO to officials and members of NGOs who could be useful to this cause,” he says. He also wrote a book in Turkish on the subject.

Many of the misgivings about UNESCO World Heritage listing apply equally to the 21st century phenomenon of mass tourism. As The Economist recently noted, tourism now accounts for almost a tenth of global GDP and is a reliable source of growth for places that may otherwise struggle.

At the same time, the volume of tourists is causing places such as Koh Tachai island in Thailand and Santorini in Greece (both not UNESCO listed), as well as the Seychelles, Barcelona and Amsterdam (all with listings) to either restrict tourist numbers or ban further large hotel developments. Yet tourists would travel to these destinations because of their beauty and history, whether they are listed or not.

Where listing can make a difference is when a site is endangered. When an aluminum plant was given the go-ahead to be built near the pan-Hellenic sanctuary of Delphi in Greece, the international attention that came after the site’s listing averted the threat. Funds made available from UNESCO can also rescue long-neglected and irreplaceable man-made and natural treasures, with the elegant Buddhist temple of Borobudur in central Java counted among the success stories.

More people are living into old age, owing to dramatic improvements in global health – but what is the cost?