They go quietly. By, more than seven million Germans – 20% of the labor force – will have left their desks and workbenches to retire (if labor force participation rates stay constant). Employers will struggle to find successors as Germany ages and its workforce shrinks.

The absolute number is similar in Japan, yet constitutes a smaller share of workforce (15%). Younger societies in the US and UK lose seven million (5%) and 600,000 (2%) workers respectively, according to International Pensions calculations.

Meanwhile, the number of consumers stays largely constant and the average amount of goods and services available per person will shrink – if productive structures, that is output per hour, hours worked and labor force participation stay constant. The question then is: Where will all the wealth come from?

One of the world’s fastest aging countries, Germany risks losing 15% of its GDP per capita by. Both the US and the UK, while aging slower than Germany, will experience a decline of approximately 10% in the average well-being, according to our calculations. Having reached a demographic slowdown around, Japan is roughly in line with the US and UK before its GDP per capita will see similar declines as Germany between and (see graph below).

SO WHAT TO DO?

Societies have three options to fend off the cost of aging. One is work longer; two is increase the productivity of workers; or three plug the demographic drain with formerly marginalized groups: women, the elderly and immigrants. But unless we make use of these options, the effects of aging will decrease the amount of goods and services available for consumption.

Societies need to rethink their concept of gainful employment to include older workers and women in the workforce, applying a blend of policies ranging from labor market to social security, health and education to be prepared for aged societies, or risk being unprepared for the onset of aging. Labor markets need to become more flexible to increase labor force participation and offer incentives to retire later. Workers’ productivity needs to be boosted through lifelong education, improved health and the use of technology to ultimately extend professional lives while addressing the particular challenges of older workers. 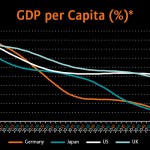 To understand the impact of aging on productivity in Germany, Japan, the US and UK, International Pensions calculated the decrease of the labor force until. The productive structure – hours worked, output per working hour and labor force participation – was assumed to stay constant while populations age as projected by the United Nations.

Gross domestic product per capita from, the most recent data available, was used as a measure of well-being. It indicates the total amount of goods and services produced in one year and divides it by the nation’s total population. Thus it gives a sense of how much is available for consumption to every person in an economy.

Please note, that the workers represent only a share of those of working age as not everybody aged 15 to 64, the standard definition of working-age population, is necessarily gainfully employed.

Output growth declined since and was further weakened by the financial crisis, the International Monetary Fund reports in its outlook Uneven Growth: Short and Long-Term Factors.

The future, as the IMF sees it, does not look particularly bright either. “Potential growth in advanced and emerging market economies is likely to remain below precrisis rates. In advanced economies, potential growth is expected to increase only slightly from current rates.” The IMF cites aging populations and an only gradual increase in asset growth as the main reasons. In emerging markets, potential output growth will decline further due to aging, lower investments and lower total factor productivity growth.

So where have all your colleagues gone? Retirement has picked them everyone, Pete Seeger might have responded.

Societies need to adjust to aging, but the question is how? Our economists Michela Coppola and Richard Wolf discuss three approaches in forthcoming articles on productive structures.

Christian Gressner, editor 07/08 at 11:19AM
Enjoying life is certainly a good idea, Anna, but there are numerous solutions to the challenges of aging. The next article in this series, to be pusblished this week, discusses how working just a little longer can make a huge difference. Best, Christian
Anna Ruhr 05/05 at 02:14PM
Immigration, working longer, more hours or just maybe kicking back and enjoying life a little more?
Mungo Jerry 04/30 at 10:33AM
Lot's of scary stuff here. Lucky the robots are coming to save us.
Related articles
Related articles

To prevent a loss of wealth due to aging, Germany would have to increase labor force participation among its elderly – as Austria did successfully in recent pension reforms

The John Henry days are over

How the second machine age will transform our lives