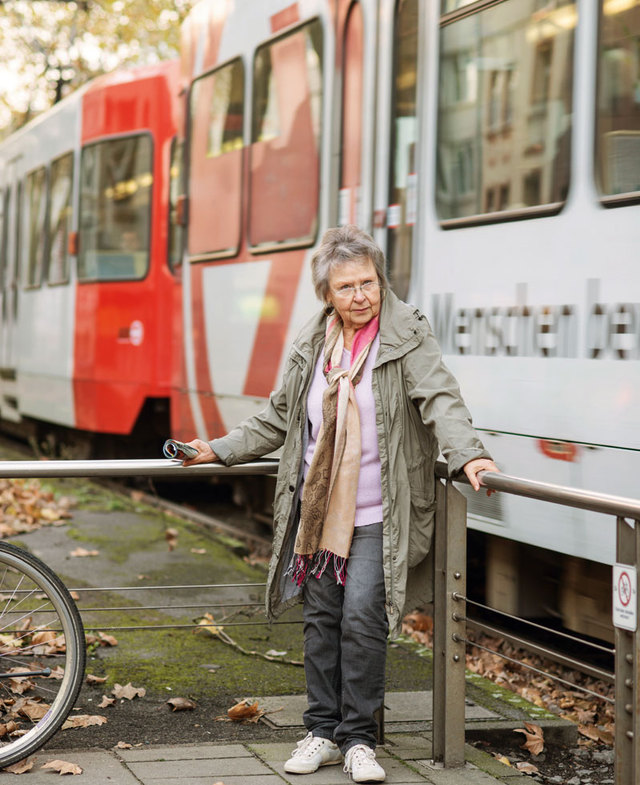 The image of pensioners struggling to make ends meet doesn’t match the picture painted by the German Federal Statistics Office. Referring to senior citizens in a December report, the Statistics Office noted that the group was “predominantly vigorous and financially secure.” The report on old-age security states that the average income of people over 65 is €2,433 ($3,345) for a married couple, €1,560 ($2,145) for single men and €1,292 ($1,776) for single women. Paulat receives about €250 ($343) less than the average. “The law on pensions is tailored to men,” she says.

It’s not exactly obvious that Renate Paulat is poor. It only becomes clear when she talks about how much she used to earn and what her pension was to start with. Born in January, she has been receiving a pension for 14 years. Describing the 79 year-old as sprightly would not do her justice. Paulat is bursting with energy. Her apartment is stylish, with a lot of white. Everything is spick and span. There is a well-stocked bookshelf in the living room. All her furniture is old.

A REMINDER OF THE PAST

She used to work as a purchasing agent in the furniture sector of a major store. Later on she set up her own retail store selling gift items and softwood furniture. It was all going well until large furniture stores realized that small items could also be big business, and imitators popped up everywhere.

Reflecting her former standard of living, Paulat’s apartment is a reminder of better days. While she ran her business for 17 years, in retrospect, she believes becoming self-employed was her biggest mistake. She made no pension contributions during those years, a decision that comes back to haunt her today. If she had had the income level of an average contribution payer then, she would now be receiving €478 more a month.

At age 62, she stopped working and was happy to sell the store. But there were still debts, which she paid from her life insurance. What remained were 35,000 marks (worth approximately $25,000 today). This she converted into an annuity which now pays €182 ($250) per month. This comes on top of her statutory pension of €842 ($1,157), which is left after health and long-term care insurance contributions have been deducted. Once rent is subtracted, Paulat is left with €424 to cover her living expenses: food, toiletries, clothes, medication and public transport.

In the state of North Rhine Westphalia, basic welfare provision (Hartz IV) is €382 a month. In addition, the government provides the cost for an apartment. What Renate Paulat lives on is €44 more than social welfare, but even if she could, she wouldn’t turn to the state for support. With rents set to increase, however, she is considering applying for a housing subsidy.

Living costs are clearly her biggest liability. Paulat pays €600 ($824) for her 63-square-meter apartment. The building has been renovated and she now has a balcony outside her kitchen window. This is a worry as the balcony counts for four extra square meters of living space, which means her rent will go up. She doesn’t yet know by how much, but there is a risk that she will have to move out and downsize. “Of course, I’ll also be fine if I have 50 square meters,” she says, “people can do with less.”

Doing with less is not new for Paulat. She got rid of her car. Instead of going to the book store, she goes to the library. She stopped wearing the latest fashion and her jewelry is long gone. She buys her food at discount stores and fills an old Coke bottle with tap water when she meets friends at the community center. There is money for a TV, Internet and a basic cellphone. That’s it. She still has an emergency fund, but is saving it to settle her final affairs, which a friend will take care of.

It is not just the objectively measurable poverty that causes problems in old age; it is also the social decline. Becoming poor is even more exhausting than being poor. Having to restrict oneself, learning to save and the constant reminders that something is no longer possible is tiring. “It wears you out, having to always watch your money.”

In Germany, 12% of men are considered to be at risk of poverty but, for women, the figure is as high as 16%. To bridge the income gap, many pensioners are forced to – or still want to – earn extra money. In late, Germany’s Employment Agency estimated that 812,000 people aged 65 and older were working as “mini jobbers,” that is, in positions that pay a maximum of €450 a month. The number of people employed in this category has been increasing for years.

Paulat does not hold a mini job, but she continues to work. For the last three years of her working life, she worked in a university library. Having turned 65, she was dismissed from the Civil Service although she would have liked to work longer.

Now Renate Paulat looks after a dementia sufferer on behalf of the Red Cross. She reads to her, takes her for walks. It is a voluntary, unpaid job for which she only receives expenses. Some dementia sufferers are younger than her. Is she worried about needing such long-term care herself? “It might sound arrogant, but somehow I’m just not that type of person.”

Keeping an eye on the future of aging

Aging populations in both industrialized and emerging countries are posing a challenge to policymakers all over the world. Research can assist in coming up with effective solutions

Aging: a surprise winner in the cognitive race

Much like Aesop’s fable about the tortoise and the hare, new research into aging shows that slow and steady wins the cognitive race