All is quiet on the Western Front

On ANZAC day, here is a story of two opposing world war one soldiers who never met but whose futures would become entwined 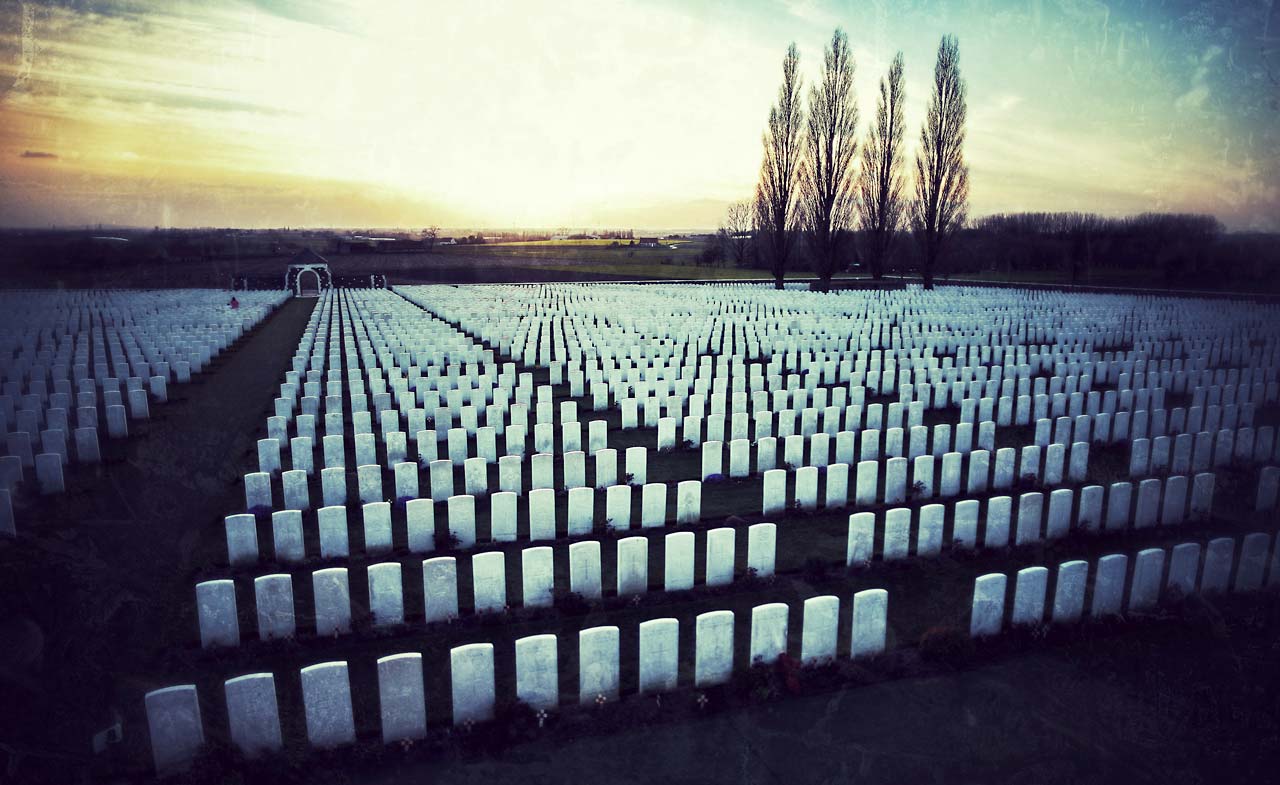 All is quiet on the Western Front

On ANZAC day, here is a story of two opposing world war one soldiers who never met but whose futures would become entwined

All is quiet on the Western Front, the long line of slaughter that once stretched from the Swiss border down past Verdun and through the muddy fields of Flanders to the English Channel.

One hundred years later, all that remains to mark the sites where millions of troops fought the pitched battles of the Great War are crumbling sections of trenches, rusting barbed wire and large, immaculately groomed cemeteries.

Australia was only 13 years old when world war one broke out and while many nations were swept along by the “will to war,” the world’s youngest country believed it had a particular point to prove. There was a sentiment among its people that Australia would never truly be a nation until an act of valour crowned its coming of age.

By the time James O’Kane was old enough to fight, ANZAC troops had fought at Gallipoli and tales of their bravery had inspired him to enlist. James O’ Kane was an orphan from Melbourne with grey eyes and sallow skin who stood just five feet four inches (164 cm) tall. After swearing to “well and truly serve our Sovereign Lord the King and to resist his Majesty’s enemies,” Private O’Kane, Regt. No. 3108, embarked for France.

By the time James landed at Marseilles, the man with whom his family’s future would be intertwined had been fighting for two years. Franz Sales Hartmann, a 28-year-old bookkeeper from the small Bavarian town of Altdorf, did not share the excitement that swept Germany at the outbreak of the war. Franz believed little would be resolved by bloodshed and only the threat of capital punishment forced him to respond to the mobilization order.

According to family legend, Franz returned home to interrupt his own memorial service

The Schlieffen Plan, the strategy designed to overcome Germany’s numeric inferiority through decisive deployment of its armies, wheeled men and equipment in a huge arc through northern France and neutral Belgium. Franz quickly found himself in the frontline as this giant pivot degenerated into bitter trench warfare.

In April, Franz was wounded in the face and evacuated. He recovered and returned to the front where he was wounded twice more that year. According to family legend, he once returned home to interrupt his own memorial service. A local man by the same name had been killed and authorities had mistakenly informed Franz’s family, who were mourning his death.

In, German strategists attempted to break the deadlock with a massive assault around the fortress of Verdun in northeast France. It began in February, with an avalanche of shells and poison gas, and continued without interruption for 10 months. Throughout it, Franz closely hugged the earth and prayed. He later described it as “lying in the grim mud of hell for ever.”

Over a million casualties in 300 days

The battle of Verdun caused over a million casualties in 300 days and little was achieved. As the fighting finally wound down, Franz was again among the wounded. As he was evacuated, James O’Kane was taking up his position some 200 kilometers (120 miles) to the west. It was the closest the two ever came to meeting.

After landing in France in, James and his fellow Australians had been rushed to the front line for the battle of the Somme. Their introduction to war was the Battle of Fromelles and James’ unit, the 59th Battalion, was among the first to attack the German lines.

The scene is described in To The Last Ridge by infantryman WH Downing: “The 59th rose, vengeful with a shout – a thousand as one man. The chattering, metallic staccato of the tempest of hell burst in nickelled gusts. Sheaves and streams of bullets swept like whirling knives. There were many corpses hung inert on our wire … A few yards more and there were but two hundred marching on. The rest lay in heaps and bloody swathes.”

In one night, the 59th lost 700 men. But Fromelles was only a foretaste for the Australians. Amiens, Mouquet Farm, Pozieres, Flers, Passchendaele, Bullecourt: beautiful names that heralded death for men of all nations.

On 8 August, the Australians, with the Canadians fighting alongside them, won a victory that changed the course of the war. At Villers-Bretonneux they smashed the lines of the exhausted enemy. The German commander Erich Ludendorff described it as “the darkest day of the German army.”

During that time, James was wounded by poison gas. He had survived Fromelles, but in the intervening years was wounded twice: in the hand and more seriously in the back. The ringing bells, flags and tears of Armistice Day on 11 November found him recuperating in England.

The end of carnage

When the Armistice was signed 99 years ago, it signalled the end of the carnage. More than eight million men had been killed, and another 21 million wounded. Civilian deaths were estimated at 13 million; northern France, Belgium and Poland lay in ruins.

Franz recovered from his wounds at Verdun, married a local woman and raised six children. He talked about the war, but his children were too young to understand. Later, they were plunged into the nightmare of life under the National Socialists (Nazis) and were too busy surviving to listen. Franz died of cancer at the end of and, apart from a box of military records and medals, left only a few tales of the futility and mud of Verdun in their memories.

Well, we believed we had a duty

James shipped home, diagnosed with “Effort Syndrome.” He was a bit of a hell-raiser and become a local motorbike champion before he settled down and married a young nurse with whom he raised four children, a garden full of roses and three fruit trees. While his lungs and back continually troubled him, he lived to the age of 86.

He rarely spoke about the war, although as a child I once asked him why he had gone. He sighed and replied: “Well, we believed we had a duty.” His heavy tone indicated that the answer was as unsatisfactory for him as he expected it to be for me.

Franz Hartmann had been compelled to fight. James volunteered. But both men were driven by the same reasons – God, King and country – abstractions that quickly lost meaning in the trenches. In the intervening years it became obvious to James, as it had to many, that he had been misled. It was not the “War to end War.”

For James to explain why he had fought would have meant bridging a gap of understanding that decades later seemed incomprehensible – even to him. Driving through France years after his death, I thought of James and stopped at the old battlefields. On a warm summer’s day, my wife and I parked our car and visited the Australian Cemetery at Fromelles. With our two boys, we stood before the memorial marking the graves of 410 unidentified Australians.

James O’Kane never met Franz Hartmann. Both died without ever knowing of the other’s existence. But they had more in common than the enmity of a battlefield and the fact they are the great-grandfathers of my sons. James and Franz, for all their suffering, were among the lucky ones: they survived a conflict that ripped the heart out of a generation. Although we may never be able to understand that tragedy, it is important that we never forget it – nor the follies, misconceptions and prejudices that led to it.

A tale of two demographics

Meet Thomas and Wilhelmina Schmitt, father and daughter, and the challenges of coming of age in turn-of-the-century Germany

Bismarck pension in the modern era

With the number of elderly expected to double by, global aging will need to play a key focus in future United Nation’s global development goals

If Bismarck’s model was still running

For a modern Bismarck, what would a new pension system look like today? Michela Coppola investigates

A clash of generations

Europe faces a war between the old and the young, primarily fought at the ballot box, warns Princeton Professor of History Harold James